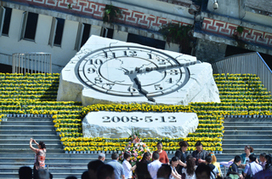 Yesterday was the fifth anniversary of the 2008 Sichuan Earthquake, a magnitude 8.0 quake which struck a mountainous region in southwestern China, destroying several villages, killing more than 70,000, and leaving another 18,000 still listed as missing.

Hello! My name is Ian and I have been addicted to weather since I was about 3. My hero growing up wasn't the police man, superman or even a teacher. Mine was a Meteorologist named Percy Saltzman. I have been chasing storms for a long as I can remember and according to my doctor, I am NOT crazy. I am a storm chaser, weather freak, Social Media Educator, amateur Photographer, speaker and father of Twins.

Sorry, the comment form is closed at this time.